add_location
Been here
bookmark_border
Add to trip
share
Share
favorite_border 100
Like
bookmark_border 30
Add to trip
share
Share
Famous for: Monuments, Iconic Sites, History and Culture, Architecture, Ancient Ruins
The Parthenon is one of the most famous monument in the world and one of the greatest greek architectural masterpiece. Parthenon exhibits ruins of an ancient temple with doric style of architectural. The symmetry and optical illusions created due to its architectural innovation is worth exploring.
About Contact Location
About Contact Location
event_available When to visit: january - december
access_time Timing:
08:00 - 19:30 : Sunday, Tuesday - Saturday
11:00 - 19:30 : Monday
hourglass_empty Duration: 2.5 hours
account_balance_wallet Entry Fee: € 20
info Tips: It is advisable to visit the Parthenon before climbing up the Acropolis. Watch the video shown on the top floor of the museum, it will give some insight into the history of the Parthenon.

The Parthenon is an ancient temple deicted to goddess Athena built in Doric style with iconic Architectural features. It is one of the significant building in Acropolis with innovative concept and execution. The Parthenon is especially popular for its optical illusions and unique design features.

The Parthenon has served many purposes in the past. It has served as a treasury for the Athenian Empire, as a Christian church dedicated to the Virgin Mary, and as a mosque in the early 1460s. Since 1975 restoration work of the Parthenon has been started expected to complete by 2020.

Architecture of the Parthenon

Athena Parthenos used to be only sculptire in the Parthenon from the hands of Phidias. This sculpture is now lost and its images can be seen in copies, vase painting, gems, literary descriptions and coins.

It is advisable to visit the museum before climbing up the Acropolis. Watch the video shown on the top floor of the museum, it will give some insight into the history of the Parthenon.

How to Reach The Parthenon ?

To reach the Parthenon, the nearby stations are Monastiraki, Thesion and the Acropolis Metro station. 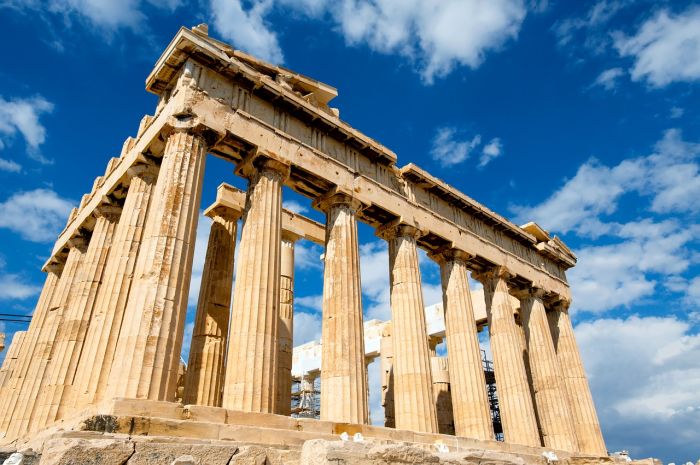